Thanks to Padgett for this information. performanceresearch.us/padgett/ 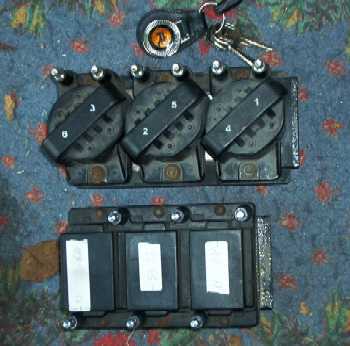 When the Bonneville (see Family Car ) was about five years old and had just passed 50,000 miles, it developed a stutter - a miss when going up a slight grade at about 50 mph in OverDrive/Lockup or about 1500 rpm. Heavy load, low rpm, light throttle. Troubleshooting pointed to the coilpack which was replaced. Since all three coils are in a single assembly this meant that all had to be replaced. Have since found that this is a common problem with the Magnavox style electronic ignition system.

A few years later we purchased the TranSport (see Fiero Redux ) and I noticed that the ignition module was considerably larger and had individual coils. Interesting but of limited interest at the time.

Cut to the summer of 2003 and looking through the factory service manuals I noticed that the pinout for the 92 Delco Ignition was the same as that for the earlier Magnavox and as I saw a number of people experiencing failures of either the ESC or the Coilpack, often with major damage to the pocketbook I began to wonder if they were interchangable.

September 2003 and I was actually home for a few days and decided to find out. A trip to the local junkyard provided slim pickings - most modules were missing and the first I found turned out to have a broken connector. A bit more looking and one turned up in a 93 TranSport with 180k and marked "bad motor" - not a good sign but only one I found.

For a conversion you really a number of pieces: 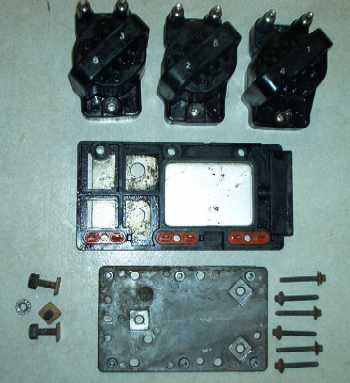 The first two are available from most parts houses but expensive. The rest you are expected to already have so is best to start in a junkyard.

With parts in hand the first step was to compare mountings and it is evident that the two systems were designed to fit the same cars, the three mounting bolts were perfectly aligned even though the Delco unit is considerably longer. 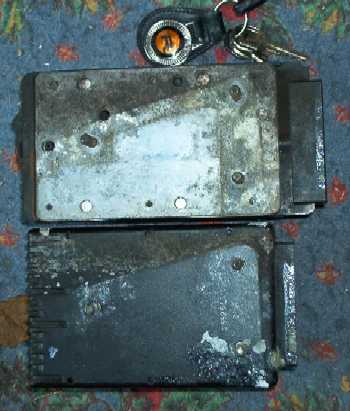 Ignition Mounting Points. Delco is considerably longer but mounting screws are in the same place. 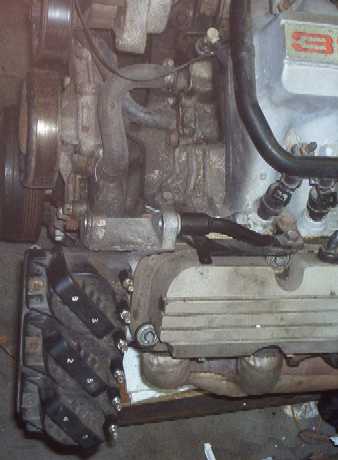 The initial feeling that the Delco ignition is more powerful is borne out by the available information on the two ignition systems:

In 2003 there is another reason looming. The last Magnavox ignition was used by GM in 1992. Parts that are already expensive will continue to rise as the supply dries up. On the other hand the Delco ignition has been used since 1986 and is still being used in 2003 - according to the ACDelco web page the replacement ignition module (D1977A) has been used on 247 different car models (3800s) and the coils (D555) have been used on 1043 different cars so far and will probably continue to be used in the future. Consequently, replacements are likely to be available for a while.

Back in the garage, the first installation was a bust. Engine cranked but would not start. Took module to AutoZone and tested it on their Wells tester (plug). Three trials said "good". Took home, installed, and cranked right up. Once. Returned a half hour later and back to "cranks but does not start". Reinstalled Magnavox. Started instantly.

A week passed and surprisingly was still in Orlando (my job is like that - months of 60-80 hour weeks and then occasional doldrums). Returned to the Boutique of Junque. Found a '93 Regal with 3800 and intact ignition. Grabbed.

Returned home and installed. Started right up. Continued to start right up. Matches the 50% law of JunkYards - every other electric thingie works so always get two. 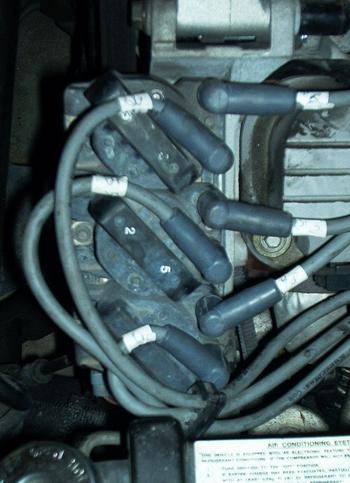 Delco Ignition Mounted on '88 "C" 3800. The original mounting bracket does not need to be changed.

Note the odd routing of the 1-3-5 spark plug wires - this was because they were sized for the Magnavox which has odd numbered connections on the left side while the Delco has all connections on the right. The wrap was necessary to keep the wires from drooping onto the exhaust manifold (not a good idea)

So it is working. Not any real noticable difference other than maybe the idle is a little smoother. But if something goes wrong, parts are available anywhere.

In the junkyard just look for anything after 1992 with a 3800 engine and there you are.

The following is an excerpt from a 1993 Buick Parts and Illustrations catalog showing the parts required to install a late ignition system. Part numbers may have been superceeded. The two systems I have use flat square head screws (number 8 in diagram) captive between the plate and module - when loose they wobble but do not turn. 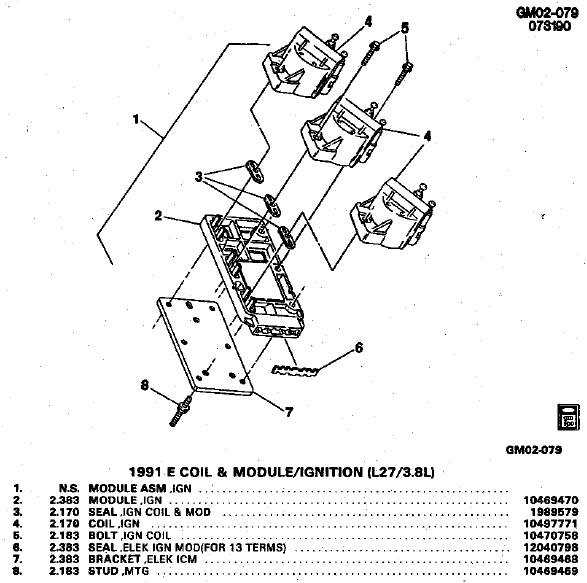 Delco and Magnavox Ignitions (side view)

Now that you have the stronger Delco ignition you might want to consider using a plug with an .060" gap instead of the smaller gap a weak Magnavox will require. For my take on that see 3 vs 14.

In a few cases I would install a module and the car would not fire. This failure may have been improper seating of the 15 connector harness to the module. If no fire, check that all of the connectors are clean and shiney and tighten the screw firmly (do not play godzilla though). In several cases I used the break out box I built and the dysfunctional module ran perfectly and continued to do so when the box was removed

Ignition Break Out Box on Car

Caveat: I have been told that after 1995 the configuration of the base plate changed. I have not confirmed this but be careful. The module is the same for all later 3800s (to 2004) and the coils have been used on many different models. For a complete model listing by part number (module D1977A and coils D555 ) see the AC Delco web page and select "Vehicle List".

Note: the ignition module is specific to the 3800 and the harness connector is keyed to the specific engine harness. The module for a 3.4 or 3.1 engine will not fit a 3800 but the coils will likely be the same.

Sources of modules: I have compiled the following cross reference table of candidate modules but have had mixed experience with some (crank but no fire despite coming up GOOD on a tester). Since these are expensive and return policies on electronics varies, make certain that you can return if it does not work for your application. In limited testing I have found that anything that does not work on my 1992 Pontiac TranSport with 3800 engine is not going to work as a Magnavox replacement.

NOTE: this is merely a listing. I have tried some but not all of these and is not to be considered an endorsement of any.

Contents copyright 2003-2010 by Padgett except where indicated.

Thanks to Padgett, member of the Reatta forums, for this information.

ATTENTION: Use any information you find on Reatta Owners Journal at your own risk. Carefully read and agree to the DISCLAIMER AND FAIR USE NOTICE before using any information found on this website.