The following information will help you learn more about your Reatta.


The VIN (Vehicle Identification Number) can be found on a tag attached to the front of the dash on the drivers side of the car. It can be read by looking through the windshield from the outside. A VIN Decoder can be found here.


The following chart gives a general description of what each digit in the VIN means:

The VIN will give you the sequential number of the vehicle based on the order in which it was entered into the system (as in GM's computers). All Reatta VINS started at 900000 (last 6 digits of VIN number) for all four model years, and started over each new model year. So, VIN 900001 would have been the first car of any given model year, as the build order was entered. My 91 is 901008, meaning #1008 of the 1991 model year.

Where this gets complicated is that due to the nature of how the Craft Centre operated and how the cars were assembled. They were not necessarily built in the exact order that the VIN numbers were assigned. I would say that in most cases the cars were built fairly close to the point where the VINS were entered for build order, but not in 100% exact sequence by any means.

Another issue is that based on what I have read in various places anecdotaly (and this may or may not be correct) that for production purposes, cars with a certain paint color were grouped together in production, even if the VINS were not sequential. This was done so that the paint booth could be setup to do a group of cars in one color before changing over to another, streamlining the paint process.

Finally, 90 & 91 also have two models - coupe and convertible. While the 6th digit in the VIN does notate the difference (coupe has code 1G4EC1, where 'vert is 1G4EC3 - See chart below) there is no subset of production sequence numbers just for convertibles, they are all assigned out of the same block starting at 900000. So, if you were to say you have 1 of 1214 '91 coupes (as I do), it is harder to determine exactly which number it is because there will be convertibles ahead of the number in the production sequence (unless you had car 900001 I suppose). As well, there were some VINS assigned near the tail end of production in 1991 that it appears were never built due to the somewhat abrupt cancellation of the Reatta.

The following chart shows the designation for the Reatta Coupes and Convertibles: 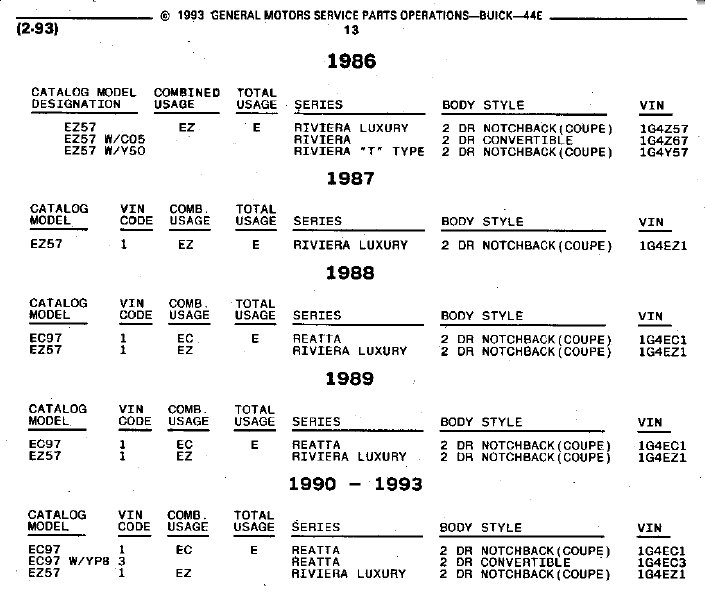