These instructions are for replacing the Buick Reatta front strut assembly on a 1989 Buick Reatta. Other models should be the same but there could be minor differences. These instructions assume the spring has already been installed on the new strut.   If the struts are ordered new the spring and top plate/bearing should be ordered separately. Assemble them per the manufacturers installation guideline before starting this procedure.

Always replace both front struts at the same time. Problems may arise in handling if only one strut is replaced.

Preparing to remove the struts:

Make certain the vehicle is supported safely before starting the following procedure. Be aware that the strut could have spring tension on it that could cause suspension parts to move without warning. Stay alert and don't get hurt! 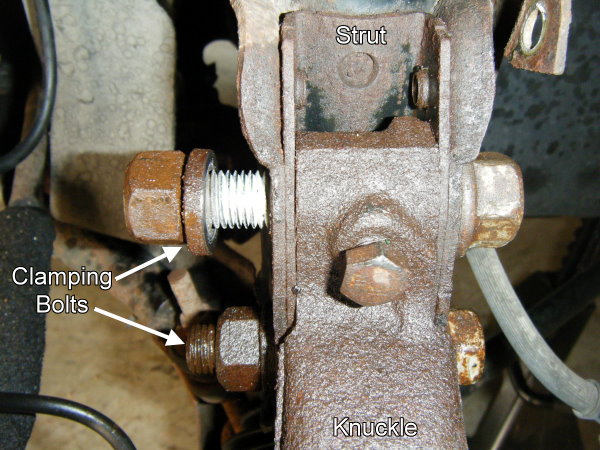 You do NOT want to over extend the drive shaft when removing the strut.  Keeping the wheel assembly as close to it normal position as possible needs to be at the forefront of the effort as you actually get to removing the strut assembly.  If you do overextend it, you will pull apart the inner CV joint and potentially damage the drive shaft seal on the transmission. If you do overextend the drive shaft on either side, you CAN'T just slid it back in blindly.  The drive shaft DOES normally move in and out as the suspension travels up and down, but that trail is limited and if you over extend it, well you have to totally remove it, slip the boot back, reassemble the CV joint and then reinstall, being very careful not to damage the seal.

Install procedure is just the reverse of removing the strut. Refer to the photos above.

Next stop - Alignment shop for a 4 wheel alignment.

Your Reatta will need an alignment after you replace the struts. If you have a Reatta Field Service Manual, take it with you and make sure  the mechanic reviews the FSM procedures for aligning the suspension before he begins the work.

A side-note about my experience with getting my alignment done.

I told the mechanic that I had the FSM for his review and he responded, "everything is in the computer".  He started with the rear wheels and he worked for a good 30 minutes and said that he was close to the specs but couldn't get it any closer.  Then he started on the front and he couldn't pull the caster into specs.  He told the manager that he would have to replace the pivot bolt with a thinner shank bolt to get more rotation.  I told the manager that the mechanic should read Section: 3-A (Wheel Alignment) of the '89 FSM and using those instructions should try to do the alignment one more time.  Low-and-behold he got it into specs.  It just goes to show that sometimes you have to insist on having the work done properly.