What did you do with your Reatta today. 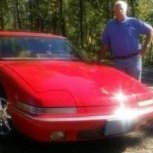